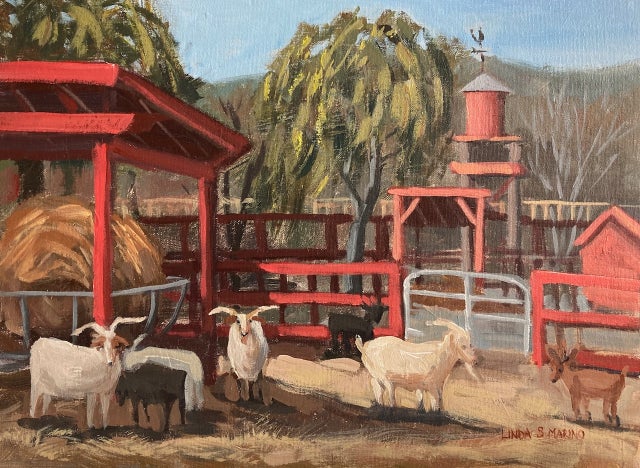 framed in a gold tone frame, other framing options are available

On Saturday October 31st a small group of us from the Connecticut Plein Air Painters Society meet up at Silverman's Farm in Easton, CT.

It was a cold morning, just the day before it snowed and up in the northern part of Connecticut they had about 3 inches. It was just a dusting for us along the coast but it did usher in the colder winter weather.

I have to confess, I had never been to Silverman's Farms but Mom took my kids there a few times to pick pumpkins and see the farm animals. It's quit the operation along Sport Hill Road in Easton. It's a fun attraction for the whole family with lots of farm animals, if I had to guess there were about 100 animals. Lots of goats, sheep, reindeer, buffalo, donkeys, llamas, chickens, roosters, bunnies and so many more!

There are pick your own apples, pears and peaches, a farmers market, food trucks, activities for the kids, a general store and much more.

Our small group met and then scattered choosing different locations to set up. I decided to paint the billy goats. I loved the tall water tower with the rooster weathervane and the red covered structures that provided shade for the animals while they eat their hay.

These goats where very smart, as soon as they saw me stop by the fence they came over right away, probably to see if I had food. But once I set up my easel, they all scattered to different parts of their pen so that there were none in my canvas view. After about an hour I think they forgot about me and made their way back to the hay barrel. Some would grab the hay from the bottom while others would jump up with their hooves on the metal frame and eat from the tippy top of the stack. It was fun to watch and observe as the little children and their parents would walk by. If the kids had a handful or hat full of food, the larger billy goats would jump onto the fence, stretch their necks and stick out their tongues to get a bit of food.

It was Halloween day and folks young and old were dressed in costumes. Some braved the cold but others had big winter parkas on over their princess gowns.

When I arrived I met Mr. Silverman and he suggested that our group of painters take a walk to the top of hillside to see the view. And what a view! It was a hike up the hill past the orchard trees but so worth the climb. I would love to return to paint the animals and the incredible view.